.
Well, you heard it here first.

Today, the State Department released Benghazi-related email from the private server and one of the (at least) two private email accounts on which former Secretary of State Hillary Clinton conducted official business – recklessly and in violation of laws and guidelines relating to the exchanging and preservation of electronic communications. Within hours, the Obama administration was forced to concede that at least one of the emails contained classified information.

Mrs. Clinton has previously and dubiously claimed that she did not discuss classified information on her private email account(s). Despite today’s disclosure, she is standing by that claim as, apparently, is the State Department. Her rationale is that the information in question – which relates to suspects in the Benghazi attack and remains highly sensitive ­- was not classified “secret” at the time of the email exchange. Instead, it was upgraded to “secret” status just today by the FBI, which was plainly alarmed at the prospect of its disclosure.

I warned about this situation back in March, when Mrs. Clinton’s violation of federal laws and guidelines in connection with using private email to conduct official business first surfaced. The problem with the rationalization offered by Mrs. Clinton and the administration is twofold.

Second, it is frequently the case that highly sensitive information is not classified (or not yet classified); nevertheless, government officials are instructed that it is not to be disclosed publicly and not to be discussed on non-government email systems.

As I explained back in March:

Mrs. Clinton [in her press conference] stressed that she never stored classified documents on her private e-mail system. To the uninitiated, this sounded like the strongest point in her defense. Mostly, however, it is a red herring, exploiting the public’s unfamiliarity with how classified information works – and fueling no small amount of irresponsible speculation over the last few days about how the nature of her responsibilities meant classified material must have been stored on her private system. In the government, classified documents are maintained on separate, super-highly secured systems… [I]n general, Mrs. Clinton would not have been able to access classified documents even from a .gov account, much less from her private account – she’d need to use the classified system… That said, there are two pertinent caveats.

To listen to the commentary over the past week, and to listen to Mrs. Clinton yesterday, one would think there are only two realms of government information: something is either a national defense secret or the seating chart for Chelsea’s wedding reception. Most information, though, is neither classified nor private. When I was a federal prosecutor, for instance, the SBU information I routinely dealt with included: grand-jury transcripts, the secrecy of which must be maintained by law; investigative reports by the FBI, DEA, NYPD, and other investigative agencies; wiretap affidavits that disclosed that investigations were underway, the suspects, the evidence, the wiretap locations, and the identity of government undercover agents, informants, and witnesses; memos outlining investigative or litigation strategies to deal with organized crime and terrorism organizations; plans to orchestrate arrests in multi-defendant cases where flight risk was a concern; financial information of subjects of investigations; personal information (sometimes including family financial and medical information) of lawyers and staff whom I supervised; contact information (including home addresses) of agents with whom I worked on cases often involving violent crime and public corruption; contact information (including home addresses) of judges in the event it was necessary to get a search warrant after hours; and so on.

None of that information was classified. I was permitted to – and needed to – have it ready to hand, but it was also my duty to maintain it in a secure, responsible manner… a duty that became even more important once I was a boss and was expected to set an example for junior lawyers and staff to follow. And mind you, I was just a government lawyer. I was not the secretary of state.

The inadvertent or unauthorized disclosure of SBU can do enormous damage. It can even get people killed. That is why the State Department has elaborate rules about SBU – rules that include instructing State Department employees to conduct their e-mail business via government e-mail accounts on government communications systems that have “the proper level of security control to provide nonrepudiation, authentication and encryption, to ensure confidentiality, integrity, and availability of resident information” (U.S. Dept. of State, Foreign Affairs Manual, vol. 12, sec. 544.3 ). As Fox News relates, it was on the basis of these concerns that Mrs. Clinton, as secretary of state, directed State Department employees in June 2011 to “avoid conducting official Department [business] from your personal e-mail accounts.”

Thus far, there has been disclosure of only a fraction of Mrs. Clinton’s existing private email – i.e., the email that she did not unilaterally delete despite being on notice that it was relevant to government investigations. Yet it is already clear that, as secretary of state, she did business in a way that was, at a minimum, grossly irresponsible… and quite possibly worse. She had to have realized the near certainty that an official of her stature would have been targeted for surveillance of her private emails by foreign intelligence services. Yet, in her determination not to leave a paper trail that might damage her political prospects, she ignored the risks. The Justice Department, which has prosecuted high government officials for mishandling national defense information, should be investigating – and that includes acquiring custody of Mrs. Clinton’s private server.

.
Krauthammer Sounds Off On Hillary Email Dump, Explains Why He Thinks ‘Whole Release Is A Farce’ – The Blaze

Conservative political pundit Charles Krauthammer reacted to the release of the first batch of Hillary Clinton emails, calling the “whole release” a “farce.”

“This is an echo of what her own press secretary said, who said there isn’t a shred of evidence. And as I’ve said there is no shred of evidence because she shredded the evidence. This whole release is a farce,” the syndicated political columnist said. “What is being released now… is stuff that was scrubbed and cleansed and decided upon, chosen by her own people, acting in her own interest, rather than… people with obligation to the public.”

“So we are getting the cleaned up version,” he continued. “And I think they are succeeding, the Clinton people. Because everybody is hungrily looking through stuff pre-scrubbed. They are not going to find anything. The Clinton’s are secretive and deceptive, but they are not stupid.”

Krauthammer then explained how he thought the process will benefit Clinton in the presidential election.

“Whatever is indicating has been scrubbed and removed. So we are going to have this long saga of the release. She will take the credit for, ‘I asked for it to be released, I wanted it to be released.’ But it’s the wrong stuff. And when people attack her later in the campaign, she will say it’s all been released, the press has looked at it,” he said.

Hillary Clinton slept through the president’s daily briefing on Benghazi. She didn’t wake up until 10:45 AM.

.
What difference does it make?

.
Hillary Didn’t Even Know Ambassador’s Name After He Was Murdered In Benghazi – Right Scoop

The State Department is releasing a batch of the Hillary emails, because the best way to make sure no one notices is to do it on the beginning of Memorial Day weekend. Hidden in one email is a pretty deplorable absence of interest and care from Hillary.

From the Washington Times:

“Cheryl told me the Libyans confirmed his death. Should we announce tonight or wait until morning?” Clinton says in the email, time stamped 11:38 p.m. on Sept. 11, 2012.

The email had as its subject line: “Chris Smith.” The murdered ambassador was Chris Stevens.

The Secretary of State didn’t even know the name of the U.S. ambassador to Libya – even after terrorists stormed an American compound and killed him.

How deplorable is that. And this is who the Democrats want to make president? Disgusting.

Not that there was ever much doubt. Three days after the Benghazi attack, the White House admitted it had pressured Google and YouTube to yank “Innocence of Muslims” as some sort of terms-of-use violation. Google refused. A week after that, having failed to twist a major corporation’s arm into censoring a politically unhelpful bit of free speech on its behalf, the State Department started running ads in Pakistan denouncing the movie, in hopes that jihadi savages would be appeased by the show of national contrition and not target any more embassies. Also around this time, YouTube did agree to censor “Innocence of Muslims” by blocking it in Egypt and Libya, the two nations that saw the most violent attacks on U.S. diplomats on September 11, 2012. Hillary Clinton had to have known about and signed off on all this, we naturally assumed. And now here’s evidence that she did: Although the message below is vague, I assume it’s referring to the ban that Google imposed on the video in Africa.

Leaning on corporate cronies to suppress Americans’ speech for political ends would be a disqualifying offense for a candidate in a sane world. 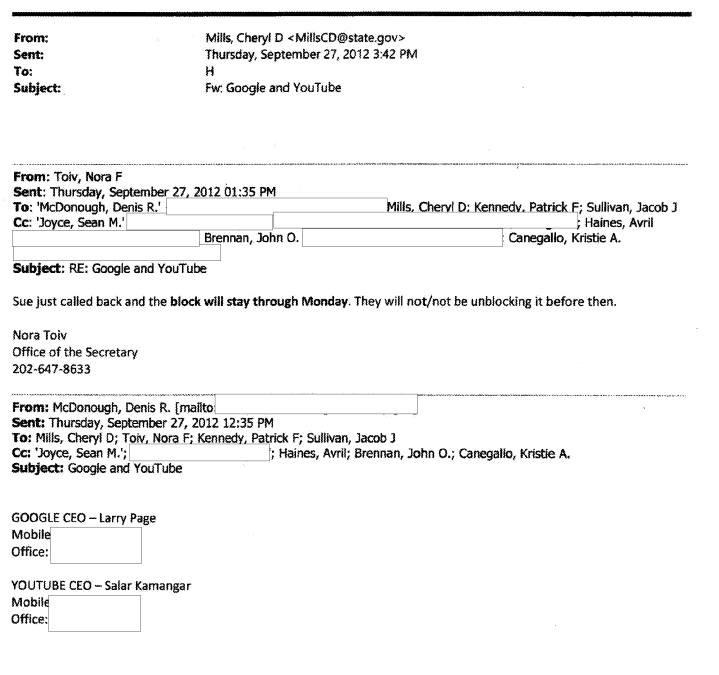 .
Fun fact: On the very day that e-mail was sent, the man who made “Innocence of Muslims” was arrested by the feds on a “parole violation.” Hillary’s leisure reading in the weeks before that was interesting too: 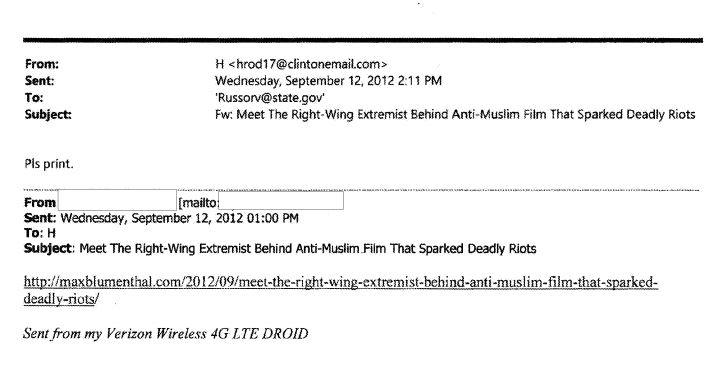 The Clinton Foundation reported Thursday that it has received as much as $26.4 million in previously undisclosed payments from major corporations, universities, foreign sources and other groups.

Thursday’s disclosure is one of a number of instances in recent weeks in which the foundation has acknowledged that it received funding from sources not disclosed on its Web site.

The ethics agreement was reached between the foundation and the Obama administration to provide additional transparency and avoid potential conflicts of interest with Hillary Clinton’s appointment as secretary of state.

The agreement placed restrictions on foreign government donations, for instance, but the foundation revealed in February that it had violated the limits at one point by taking $500,000 from Algeria.

There was one entity clearly associated with a foreign government that provided speaking fees, of $250,000 to $500,000 for a speech by Bill Clinton: The energy ministry in Thailand.

The U.S. Islamic World Forum also provided $250,000 to $500,000 to the foundation for a speech by Bill Clinton, according to the new disclosure. The event was organized in part by the Brookings Institution with support from the government of Qatar.

In addition, the list is studded with overseas corporations and foundations.

They included the South Korean energy and chemicals conglomerate Hanwha, which paid $500,000 to $1,000,000 for a speech by Bill Clinton.

China Real Estate Development Corp. paid the foundation between $250,000 and $500,000 for a speech by the former president. The Qatar First Investment Bank, now known as the Qatar First Bank, paid fees in a similar range. The bank is described by Persian Gulf financial press as specializing in high-net-worth clients.

The Telmex Foundation, founded by Mexican billionaire Carlos Slim, provided between $250,000 and $500,000 for a speech by Hillary Clinton.

Read the rest of the story here.