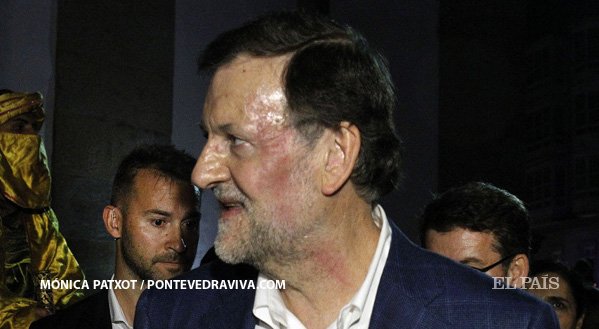 .
Spanish Prime Minister Mariano Rajoy was dealt an eye-watering sucker punch by a teenager during a campaign event Wednesday.

The young man got up close to the Prime Minister, reportedly asking to take a photograph, before unleashing his left fist into the side of Rajoy’s head.

The punch knocked Rajoy’s glasses off of his face, leaving the leader of the People’s Party bruised but otherwise “feeling good,” he later said in a tweet.

The 17-year-old attacker was later shown being taken away in handcuffs by security guards.

Rajoy had been speaking to a large crowd in the northwestern city of Pontevedra, ahead of the country’s general election on Sunday.

A flushed-looking Rajoy didn’t let the blow stop him from appearing at a nearby city later in the day.
.

NOTE: THIS LIVE EVENT HAS ENDED.

Click HERE to watch the full speech on video.

.
The U.S.-backed President and Prime Minister of Yemen, Abd-Rabbu Mansour and Khaled Balah, have offered their resignation from the country’s top positions, according to reports from the region.

Iran-backed Houthi Shiite militants have reportedly been holding Yemen’s president ‘captive’ at his presidential palace, in an action described by a Yemeni Colonel to the AP as a military coup. This is the “completion of a coup” and the president has “no control,” added Yemen’s Information Minister. U.S. officials have thus far refused to describe the developments as a “coup.”

This reportedly forced the U.S.-backed President to accede to the militant’s demands: that the Houthis are given prominent positions of power within the government, and that they will be allowed to maintain an active presence in the country’s capital city of Sanaa.

U.S. President Barack Obama has maintained that the United States’ partnership with the Yemeni government was a model for counterterrorism success. The President said in a September speech that the Yemen model for counterinsurgency would be utilized in fighting the Islamic State in Syria and Iraq:

This counterterrorism campaign will be waged through a steady, relentless effort to take out ISIL wherever they exist, using our air power and our support for partner forces on the ground. This strategy of taking out terrorists who threaten us, while supporting partners on the front lines, is one that we have successfully pursued in Yemen and Somalia for years.

Below is an English-translated version of what is believed to be Yemen Prime Minister Balah’s resignation letter to President Hadi, posted on Facebook:

The deal being worked out between the world powers and Iran is a very bad deal that Israel is not obliged by, Prime Minister Binyamin Netanyahu told US Secretary of State John Kerry on Friday.

The two met just prior to Kerry flying to Geneva to take part in negotiations of a deal in the works that would have the international community relieve sanctions on Iran in exchange for Iran freezing its nuclear activity for six months.

“I reminded him of his own words, that it is better not to reach a deal then to reach a bad deal,” Netanyahu said after the meeting. “The proposal being discussed now is a bad deal, a very bad deal. Iran is not asked to dismantle even one centrifuge, but the international community is easing sanctions on Iran for the first time in many years.”

According to Netanyahu Iran is getting everything it wants at this stage, and not giving anything in return, and this at a time when Iran is under intense pressure.

“I call on Secretary Kerry not to be in a hurry to sign, to wait and reconsider,” Netanyahu said. Repeating comments he said Thursday night, Netanyahu called this the “deal of the century” for Iran, but a bad and dangerous deal for the world.

Before meeting Kerry, Netanyahu said that he understands that the Iranians are “walking around very satisfied in Geneva, as well they should be, because they got everything, and paid nothing.”

.
“They wanted relief from sanctions after years of a grueling sanctions regime. They got that. They are paying nothing because they are not reducing in any way their nuclear enrichment capability,” he said.

Netanyahu, in his harshest comments to date on the matter, said Israel “utterly rejects” the deal, “and what I am saying is shared by many, many in the region whether or not they express it publicly. Israel is not obliged by this agreement and Israel will do everything it needs to defend itself, to defend the security of its people.”

A senior State Department official said on Friday morning that Kerry was committed to doing “anything he can” to narrow differences with Iran over its nuclear program.

“This is a complex process. As a member of the P5+1, he is committed to doing anything he can [to] help narrow these differences,” the official said.

The Islamic Republic and the Western allies were working on a draft agreement during talks in Geneva that started on Thursday, ahead of a likely announcement, The Wall Street Journal cited Iranian and Western sources as saying.

Negotiators in Geneva cautioned, however, that work remained to be done in the coming hours in very complex negotiations and that a successful outcome was not guaranteed. Iran rejects Western accusations that it is seeking the capability to make nuclear weapons.

According to the proposed short-term deal, Iran would freeze its nuclear activities for the next six months, allowing for more time to reach a permanent agreement.

The Guardian reported that the “first-step agreement” is understood to include four key points:

* Iran would be allowed to continue 3.5% enrichment needed for power stations, but limit the number of centrifuges being used. The deal would, however, not include any demand to remove or disable any other centrifuges.

* While still being allowed to work on its plutonium reactor at Arak, Iran would agree not to activate it for the durations of the six months. The plutonium reactor could provide for another route to nuclear weapon capability.

* Iran would not use its IR-2 centrifuges that are more advanced and capable of enriching uranium three-to-five times faster than the older model.

In exchange for these steps, the US would agree to ease some “reversible” economic sanctions, the Guardian reported, possibly by releasing some Iranian funds frozen in overseas accounts. In addition, the US could possibly relax restrictions on Iran’s petrochemical, motor and precious metals industries.

US President Barack Obama told NBC News on Thursday that while the United States was willing to provide Tehran with “very modest [sanctions] relief,” the sanctions architecture would be kept in place.

Sanctions could be tightened if Iran failed to follow through on commitments, he said.

Israeli Prime Minister Benjamin Netanyahu’s Likud Party emerged as the largest faction in a hotly contested parliamentary election on Tuesday, positioning the hard-liner to serve a new term as prime minister, according to exit polls.

But a lackluster performance by Likud, along with surprising gains by a centrist newcomer, raised the strong possibility that he will be forced to form a broad coalition.

The exit polls aired on Israel’s three major TV stations all forecast Likud along with its traditional hardline and religious allies, capturing a shaky majority of just 61 or 62 seats in the 120-member parliament. With official results trickling in throughout the night, it was possible that the two sides could end in deadlock.

In a statement posted on his Facebook page, Netanyahu said he would reach across the aisle and try to form a broad-based coalition.

“According to the exit polls, it is clear that Israel citizens decided that they want me to continue to serve as prime minister of Israel, and that I form the widest possible majority (coalition),” he said. “Already this evening I will begin working toward the widest possible government.”

Such a scenario would have deep implications for Mideast peace prospects. Netanyahu’s centrist opponents have said they would not join his government if he does not make a serious push for peace with the Palestinians.

Peace talks have been deadlocked throughout Netanyahu’s four-year term.

The two parties, running separately, had 42 seats in the outgoing house. In the biggest surprise, the centrist “Yesh Atid,” party headed by political newcomer Yair Lapid, captured as many as 19 seats, well above the forecasts. That would position Lapid to become either opposition leader or seek a major Cabinet post if he decides to join Netanyahu’s governing coalition.

Lapid campaigned on a platform calling for an end to the generous subsidies and draft exemptions given to ultra-Orthodox Jewish communities.

He also has said he would not serve as a “fig leaf” for a hard-line government. Lapid would likely seek deep concessions for Netanyahu in exchange for joining the government.