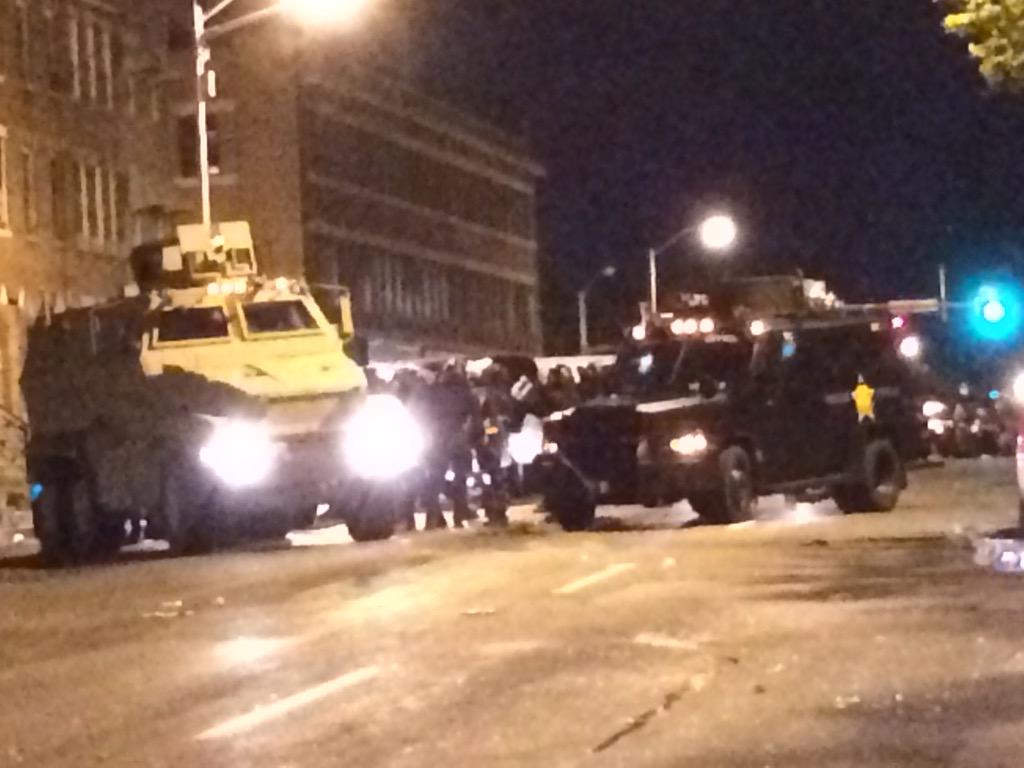 .
National Guard troops filled the streets of Baltimore in the early morning Tuesday hours, bringing a semblance of calm to a city that was overrun with protesters who had set their sights on police, injuring 15 so far in the melees.

.
Fox News reported some of the injuries were due to bottles hurled at police, but all are expected to fully recover.

“We went to bed last night and the entire city smelled like smoke,” said Peter Doocy, from Fox News on Tuesday morning. “We woke up this morning and it’s pretty much the same thing.”

Media pictures showed buildings torched and smoking, firefighters on the scene working to put out lingering flames and glass scattered throughout the streets from broken business windows. At least 50 businesses and buildings, including a church, have been damaged by protesters. 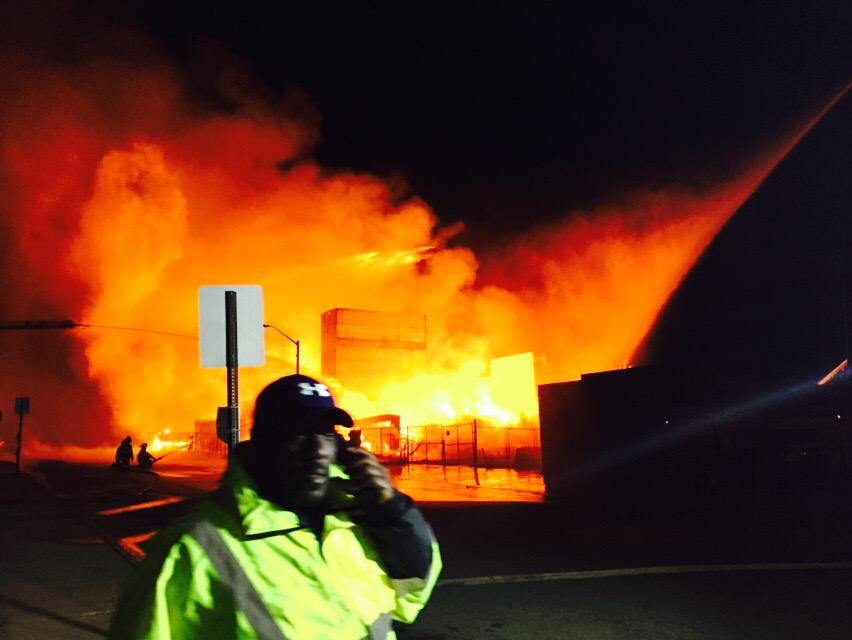 .
Much of last night’s rioting was due to teenagers roaming the streets, Fox News reported. Schools were closed and classes on Tuesday were cancelled.

Meanwhile, 1,500 members of the National Guard are patrolling the streets in tactical vehicles, and hundreds of police officers from outside the city are expected to arrive in the coming hours, Fox News reported. 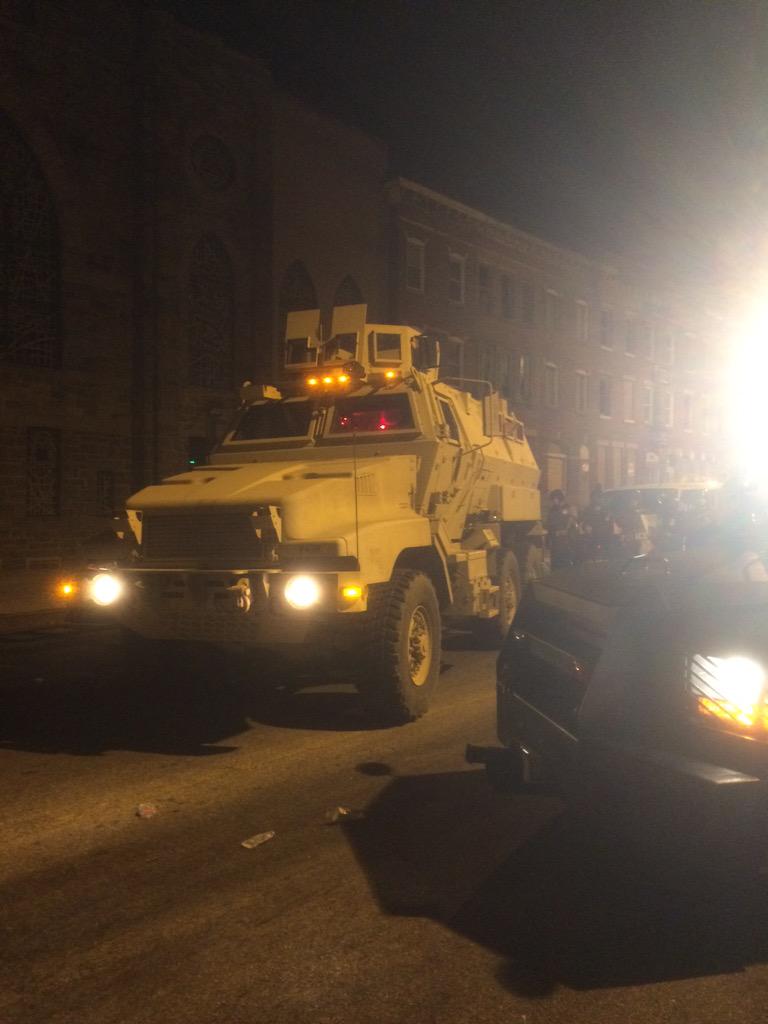 .
The scene outside City Hall, where much of the rioting on Monday had occurred, was actually calm and quiet Tuesday morning, due largely to the massive National Guard and police presence that’s been called to the city.

So far, about two dozen people have been arrested, though their charges aren’t known.

The city’s been suffering through hours of violence and thuggery, with media pictures of the scene showing car fires and swarms of angry individuals throwing rocks and breaking business windows. The protests started shortly after the funeral of Freddie Gray, the young black man who died from massive spinal injuries shortly after being taken into police custody.

A curfew that was supposed to have gone into place Monday night is now set for Tuesday evening at 10 o’clock. Much ofthe city’s violence is being blamed on poor leadership, with the mayor, Stephanie Rawlings-Blake, fielding particularly harsh fire for comments she made seeiming to suggest the protesters had a real cause and police officers were setting aside space for them to vent.

She’s since backtracked on those comments, and blamed the press for taking her out of context.

This is what she said over the weekend: “While we tried to make sure that [protesters] were protected from the cars and the other things that were going on, we also gave those who wished to destroy space to do that as well.”

Late Monday, facing widespread criticism from her remarks, she said: “I made it very clear that we balanced a very fine line between giving peaceful protesters space to protest. What I said is, in doing so, people can hijack that and use that space for bad. I did not say that we were accepting of it, I did not say we were passive to it. I was just explaining how property damage can happen during a peaceful protest. IT is very unfortunate that members of your industry [media] decided to mischaracterize my words and try to use it as a way to say that we are inciting violence, there is no such thing.”

Meanwhile, members of the media on the scene say the majority of the protesters were residents of the community, and they were destroying buildings, businesses and properties in their own back yards.

.
While the entire nation focuses on the growing threat of radical Islamic attacks in the West, there’s still an ongoing war on the southern border of the United States and it just got a lot worse.

Thanks to Obama’s willingness to allow undocumented illegal immigrants into the U.S. military, a situation bound to happen finally did.

A 34-year-old Arizona Army National Guardsman NCO by the name of Raul Portillo was recently busted in an undercover sting and accused of helping Mexican drug cartels safely transport large loads of cocaine and marijuana over the border.

Portillo, a man suspected of living in Mexico, yet serving in the Ariz. National Guard, was using his official military credentials and position to make sure cocaine shipments were brought into the United States without trouble.

He often used his military license to freely cross back and forth over the border without being subject to searches at checkpoints – even using military vehicles and military issued weapons to make his runs.

In total, at least 58 Ariz. National Guardsmen under Portillo’s command were acting as “muscle” for various cartels and being paid thousands of dollars in the process.

Portillo was even able to recruit at least one Immigration and Customs Enforcement agent to make their drug runs even easier and stress free.

Former NYPD officer Iris Aquino said of the situation, “In the case of Portillo, as well as other soldiers and sailors involved in criminal enterprises, the Defense Department and law enforcement agencies appear to be complicit in covering up the crime and misconduct cases involving enlisted ‘undocumented immigrants.’”

“If they’re undocumented, how do you know they’re not criminals or terrorists signing up to serve in the U.S. military?” Aquino said. (H/T RadixNews)

There’s no word on how many additional out of the 58 arrested so far are illegal, but one can wager that we haven’t seen the end of it.

Portillo plead guilty to all charges filed against him and was sentenced to federal prison for his crimes.

Why is Obama terminating soldiers from the military who are actual citizens of the United States and replacing them with undocumented, illegal immigrants?

This is probably a situation that even those who are aware of border patrol security flaws haven’t thought of – but it’s happening right now, unfortunately.

As long as Obama keeps brining in illegal immigrants, situations like this one will continue to happen – even within the ranks of our own military.

Share this on Facebook and Twitter if you think it’s time that someone in power steps up to the plate and does something about our current lack of border security.

.
Remember the laughter and snarky comments from the Left and its Ministry of Information when Texas governor Rick Perry activated one thousand Texas National Guard soldiers for duty at the southern border? “Ha ha, they’ll just stand around like wooden Indians and watch ‘undocumented immigrants’ walk by,” we heard from people Beltway liberals who hate conservatives, especially conservatives with a drawl.

The Left is about to get another lesson about underestimating those who live in “fly over country.” There is a local website (callthecops.net) that is reporting what Perry’s plan actually involves. Contrary to what has been postulated – even by some uninformed GOPe types – the Texas National Guard will not be standing around directing illegal aliens to the nearest aid station. They will be deputized as state police officers who will have the same powers as other sworn officers. Moreover, Perry has ordered the construction of holding camps modeled after military barracks where illegals who walk over the border will be housed until their case is adjudicated.

This plan has every chance to succeed. Those who understand the Guard and Reserve services know these units are very likely to have substantial numbers of troops who are police officers in civilian life. The transition to police work in a military uniform will not be difficult.

Given today’s headlines that tell of a new plan from Barack Obama to defeat America by flying illegal aliens directly into our country, it is likely that he believes Governor Perry has developed a powerful plan to check his attacks.

So what are the possible outcomes of this plan? If it is left to stand, it will slow the flow of illegal aliens until a better solution can be devised. It will show other governors how to handle this attack from Obama.

If it is challenged in court, it will be immediately brought before the full Supreme Court as a 10th Amendment case; and in view of Obama’s many recent losses in the Court, this could be another loss for him. It is hard to see how Obama can get this Court to declare the 10th Amendment unconstitutional.

Nevertheless, if all else fails, Perry’s plan will certainly lay a heavy chilling effect on the illegals who want to walk in and register as Democrats to get free stuff for life. It will slow the flow.

Governor Rick Perry’s plan is not a permanent counterattack to Obama’s attacks on America, but it is a short term win for America!

What an absolutely despicable little man

Mayor Michael Bloomberg turned the National Guard away from Brooklyn because they were carrying guns.

Mayor Bloomberg has snubbed Borough President Markowitz’s impassioned plea to bring the National Guard to Hurricane Sandy-scarred Brooklyn — arguing that approving the Beep’s request would be a waste of federal manpower and turn the borough into a police state.

“We don’t need it,” Mayor Bloomberg said on Wednesday during a press update on the city’s ongoing Hurricane Sandy cleanup. “The NYPD is the only people we want on the street with guns.”

Wait, the littlist Nanny Stater is concerned about a “police state”? That is rich, truly rich.