.
We reported a lot about the fascist professor at the University of Missouri that smacked a photojournalist who was covering their racist temper tantrum last year.

Well, we can all sigh in relief because the totalitarian ginger has been charged with assault:
.

A misdemeanor assault charge was filed Monday against a University of Missouri assistant professor who received nationwide attention when she called for “some muscle” to help remove a student journalist from a campus protest in November.

Melissa Click, who works in Missouri’s communication department, faces a Class C misdemeanor simple assault charge for the incident, in which she was filmed having physical contact and berating a student journalist, according to the office of Columbia, Mo., prosecutor Steve Richey. The student was trying to conduct interviews at a site set up on the university’s quad by students protesting the treatment of African Americans by administrators.

A video of the confrontation, which was taken by student journalist Mark Schierbecker and went viral on the Internet, begins with a group of protesters yelling and pushing another student journalist, Tim Tai, who was trying to photograph the campsite. At the end of the video, Schierbecker approaches Click, who calls for “some muscle” to remove him from the protest area. She then appears to grab at Schierbecker’s camera.

Schierbecker filed a simple assault complaint with the campus police department days after the incident.

Richey’s office confirmed that charge has been filed but declined further comment. If convicted, Click could face up to a $300 fine and 15 days in jail.

The incident occurred as the campus had been embroiled in weeks of protests over school administrators’ handling of a series of a racially charged incidents on campus. Shortly before the confrontation, the state’s university system president, Tim Wolfe, and Missouri chancellor R. Bowen Loft announced their resignations. Click was at the campsite to show her support for the student protesters.

Under fire, Click resigned her courtesy appointment with the journalism school the day after the incident but remains an assistant professor in the university’s Department of Communication.

Yes, it’s a small victory, but I can dig it.

Melissa Click is assistant professor at University of Missouri, but in her off time, she’s a fascist totalitarian who wants to set up a social justice warrior North Korean camp and doesn’t want any damn media to record it.

Here she is caught on camera calling for student “muscle” to take out a student journalist:
.

.
It appears that she tries to grab his camera, which comes pretty close to assault.

Amazingly, she is actually teaches communications, meaning that she would be instructing student journalists in her classroom.

She must have started to see the social media firestorm coming, because she’s protected her Twitter account: 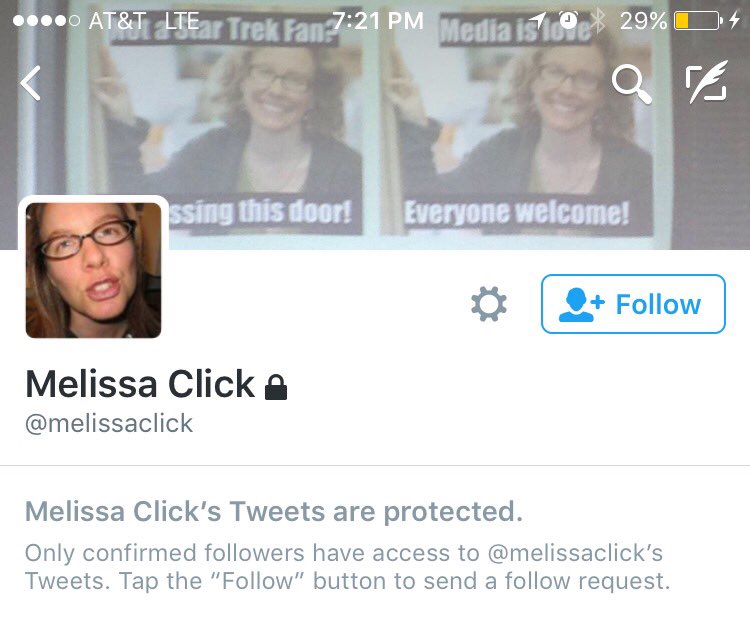 The Obama administration is praising protesters who successfully forced University of Missouri President Tim Wolfe to announce his resignation.

White House Press Secretary Josh Earnest praised the group of protesters for rallying together and demanding change, pointing out that Obama’s first presidential campaign was embodied by the same spirit.

“I think this also illustrates something that the president talked a lot about in the context of – in his campaign, that a few people speaking up and speaking out can have a profound impact on the communities where we live and work,” he said during the daily press briefing today.

The group of students accused Wolfe of enabling “a culture of racism” on campus and ignoring student concerns about recent events. Wolfe resigned after members of the college football team joined the protests, saying they wouldn’t suit up for the next game.

“That’s the kind of dialogue and work and unity that the Mizzou community is going to need to make progress on this issue,” Earnest said, in reaction to the decision calling it “a testament to the courage of the people on campus.”

He said that President Obama himself was unlikely to make a public statement about the events on campus, but didn’t rule it out sometime in the future. Earnest reminded reporters that he grew up in Missouri and shared his own thoughts on the situation.

“I think any state institution is a product of the state and that state’s history and there’s a very painful history – and it’s not ancient history in the state of Missouri,” Earnest said.

The list of demands by the protesters included that Wolfe “acknowledge his white male privilege” and hire more black college faculty members.

Swedish journalist Valentina Xhaferi set out to report on a Muslim no-go zone in Stockholm. The reporter ended up being chased out of the district by a stone-throwing Muslim mob.

A Swedish journalist attempting to make a movie about the residents of a Swedish no go zone and their habit of throwing stones at police has herself been attacked and had stones thrown at her as she attempted to film.

“They thought we crossed the limit and that we were standing on their land,” journalist Valentina Xhaferi told Swedish newspaper Expressen.

Ms Xhaferi planned on investigating police reports that any officer trying to patrol the Stockholm district of Tensta – with its foreign born population now over 70 per cent – would be pelted with rocks. She wanted to get behind the black headlines and find out what was really troubling the poor residents.

So along with a cameraman, she traveled into the suburb to film their report last week. They had set up their recording equipment in a small, central square, and spoken to a man who had agreed to be interviewed.

But as they waited, another man, who appeared to be upset, approach to ask why they were filming. He went away only to return with his gang.

“Then he became very, very angry and said he’ll get stones and show us what stoning is. When I saw that he was armed with a stone I just wanted to get out of there,” said Ms Xhaferi.

At this point more three men appeared from a subway and demanded to know what they were doing. The camera was recording, and captured the moment the men kicked the equipment to the floor, shouted insults at Ms. Xhaferi and poured coffee on the cameraman before running off…

CBS6 reporter Alix Bryan doesn’t like when people lend a hand to a business destroyed by the “diversity” mob under false pretenses, so she does what every supposedly “non-biased” media hack does, try and get it shut down on bogus fraud charges. 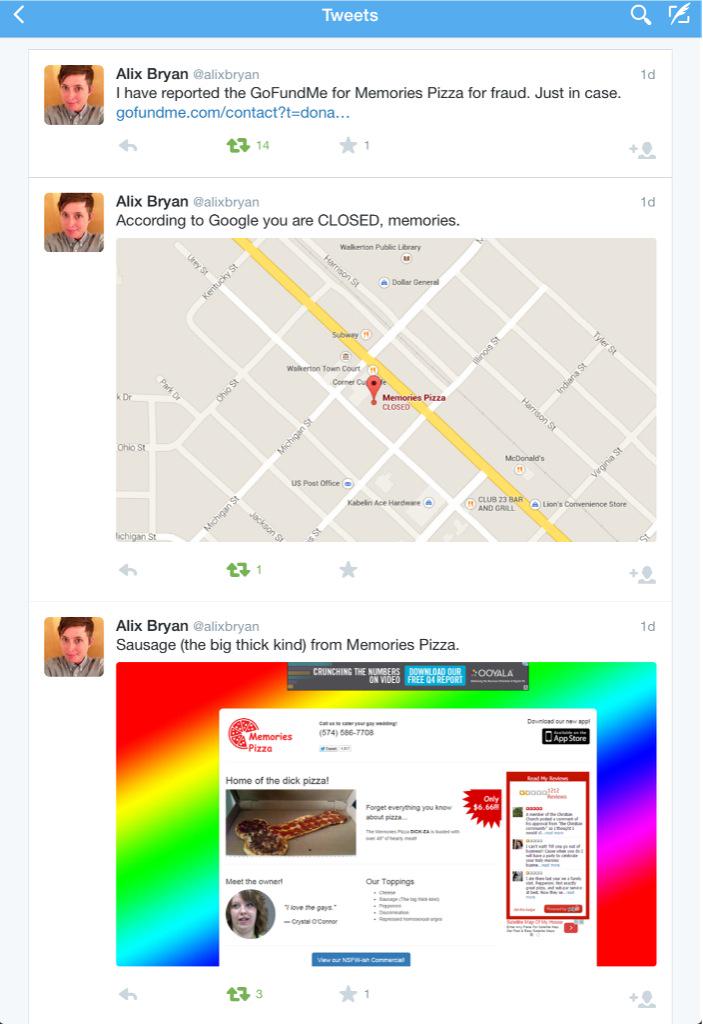 .
Alix Bryan, a social media employee with WTVR-TV, the CBS affiliate in Richmond, Virginia, is being investigated by station management for filing a false fraud report to GoFundMe against Memories Pizza, a spokesman told The Gateway Pundit on Friday.

Over $700,000 has been raised in just a few days to help the family-owned business that has temporarily shut down after being harassed by totalitarian gay-rights supporters outraged the store said in a gotcha TV interview that in theory it would not cater a gay wedding because of their religious beliefs.

Bryan posted to Twitter on Wednesday evening she was filing a fraud complaint with GoFundMe “just in case.”

“I have reported the GoFundMe for Memories Pizza for fraud. Just in case. http://www.gofundme.com/contact?t=donation_page_report&url=MemoriesPizza

When challenged for filing a fraud complaint based on no evidence, Bryan said “that is totally acceptable to do” and that had she looked in to the matter after she filed her complaint.

“Also, that is totally acceptable to do. I also did research afterward and contacted person who started fund. @LilacSundayBlog @CBS6”

Lawrence Billy Jones III, who started the GoFundMe page on Wednesday in coordination with Dana Loesch and other contributors to Loesch’s Blaze TV show, told Bryan on Twitter that she never contacted him.

Bryan describes herself on Twitter as an employee of CBS6

“I like to travel, ask questions, and help improve the world. 1/3 of a kick-ass web and social media team @CBS6 in #RVA. Opinions are my own, not employers.”

Bryan claimed her work has nothing to do with her involving her herself in the Memories Pizza story with a false report.

“My work has nothing to do with this. @LilacSundayBlog @CBS6”

Her employers at WTVR may beg to differ.

As of 5:30pm eastern time, over $800,000 has been raised online to offset the financial losses suffered by the proprietors of Memories Pizza. 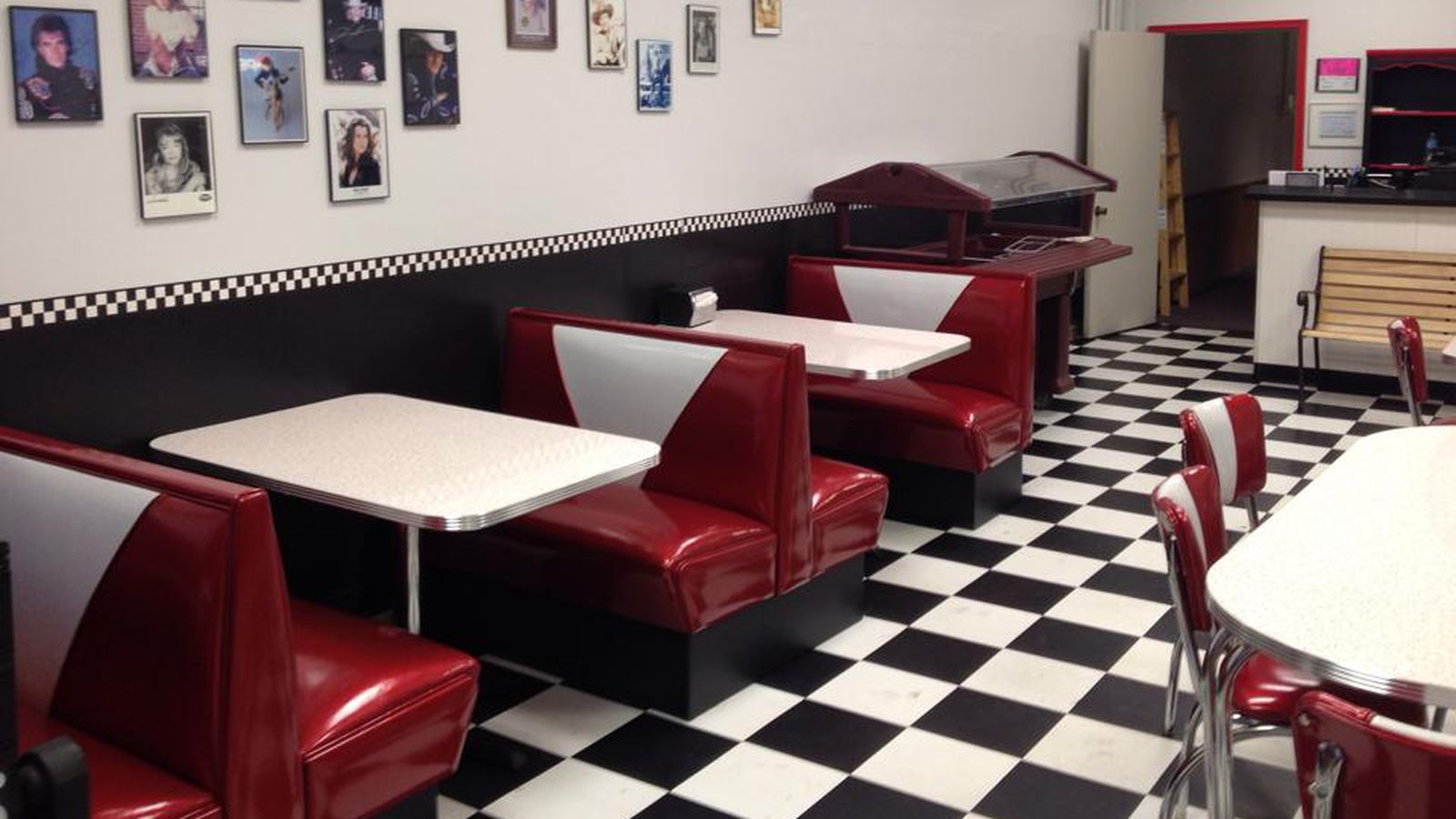 Click HERE if you would like to make a donation to these innocent victims of leftist, anti-Christian bigotry. 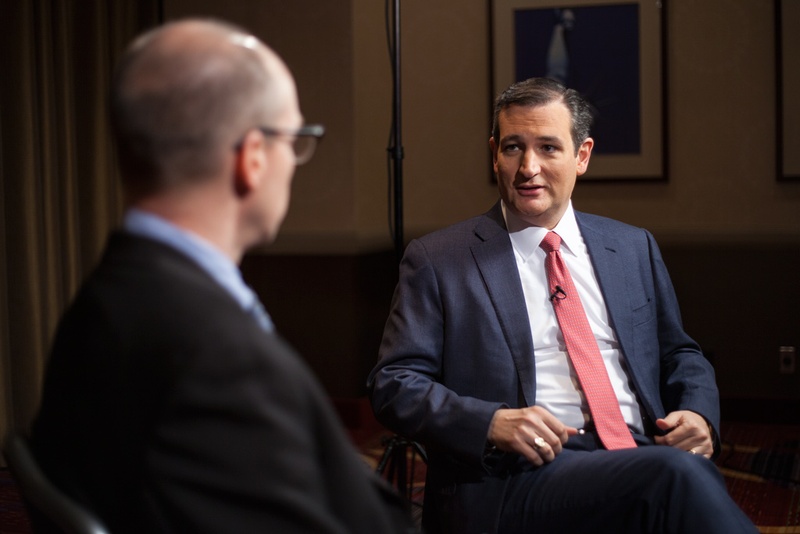 Citizen journalist James O’Keefe from Project Veritas was on The Kelly File last night to discuss his latest undercover video released Tuesday. James was reporting from the Cannes Film Festival in France where he held a press conference today.

.
O’Keefe told Megyn Kelly he was contacted by members of Congress regarding his latest anti-fracking report.

James O’Keefe: I think the nefarious thing about this film we did was they’re trying to stop our energy independence. And those Hollywood figures Ed Begley Jr., Mariel Hemmingway are OK with that and what’s worse is they’re using non-profit groups and (C)(3) groups to cover up from where the funding is coming from. Is that illegal? I know the senate has been investigating that very issue. So there are some serious issues here about the coverup of the funding and about how many movies in Hollywood are funded by these mystery groups.

Megyn Kelly: You tweeted out today that a senate committee has reached out to you over possible non-profit participation and coverup of this video. Is that true have you been reached out to by lawmakers?

James O’Keefe: I have been reached out to by lawmakers. I’m not allowed to give too much information at this point.