.
Kathleen Willey, the former Democrat activist who claims she was sexually assaulted by President Bill Clinton, is calling out Hillary Clinton for a new ad that expresses the presidential candidate’s purported concern for the survivors of sexual assault.

“She’s a money-hungry hypocritical witch who will do anything for money,” Willey told the American Mirror.

Willey pointed out she got a different message from Hillary when she accused Bill Clinton of sexually assaulting her.

“She believed what happened for sure. She just chose to ignore the plight of all of his victims, thus enabling him to continue to abuse and rape women in the future,” Willey said of Hillary.

“She’s a lying pig. I cannot believe that she had the gall to make that commercial. How dare she? I hope she rots in hell.”

.
Willey, author of the book “Target: Caught in the Crosshairs of Bill and Hillary Clinton,” has been critical of Hillary Clinton in previous interviews.

WND reported a few months ago Willey’s statements about the Clintons’ mental health.

“After watching [Bill’s] performance with [NBC News’ Cynthia] McFadden, when he said that I’ve gotta pay my bills, I think he’s showing early signs of dementia or something. He’s not the old Bill Clinton that we all remember. I mean, he was all over the place. Now you’re seeing clips of [Hillary] talking to herself all the time. I think that I want somebody in there who knows what they’re doing, and money isn’t the No. 1 issue for them. They have enough money. They made $30 million… in the last 15 months on speaking engagements. Isn’t that enough?”

WND reported last month that Willey, who with her husband, Ed, founded Virginians for Clinton and helped send Bill and Hillary to the White House in 1992, was shocked when Hillary claimed she and the president were broke when they left the White House in 2000.

“For her to say dead broke… I can tell you what it is to be dead broke and owing money,” she told WND in an interview.

Willey goes way back with the Clintons. While serving as a volunteer in the White House and facing financial hard times, she says she met with Bill Clinton in the Oval Office to request a paying position. But instead of getting help, she says, she was subjected to “nothing short of serious sexual harassment.”

Distraught, Willey fled Clinton’s presence, only to discover that her husband had committed suicide that same afternoon.

Later, she was drawn “unwillingly” into the Paula Jones lawsuit, the Ken Starr investigation and impeachment proceedings.

GOP Rep. Sternly Lectures Democrats On The Lessons He Learned In The Army During Impassioned House Floor Speech On Benghazi – The Blaze

Rep. Tom Cotton (R-Ark.) blasted Democrats for expressing “fake outrage” and claiming the investigation into the deaths of four Americans in Benghazi is purely political. He cited some of the “lessons” he learned while serving in the Army to make his point.

“A couple lessons I learned in the Army were you moved to the sound of gunfire and the most important step in the troop leading procedures is to supervise the execution of you orders,” he said. “When Americans were fighting for their lives in Benghazi, Barack Obama did neither. He sent no quick reaction force and didn’t even stay in the situation room to supervise the execution of his orders. We expect more from the lieutenants in the army than our president gave us that night.”

.
Cotton accused the Obama administration of covering up the president’s “failure of leadership by stonewalling.” However, Congress is determined to uncover the truth, he added.

Democrats “express great outrage at politicizing” Benghazi, he continued. However, he suggested their outrage is extremely selective.

The congressman then revealed one more lesson he learned while in the Army: We leave no man behind. And we will not leave these four men behind.”

The Washington Free Beacon has the video:

When a Tea Party “congressman” representing Georgia’s “15th district” made a joke at the expense of Germans, CNN’s Christine Amanpour was quick to call him out.

“Maybe if we kept a better eye on them in 1939, WWII wouldn’t have happened,” Rep. “Steve Smith” tweeted after Amanpour announced her interview with the German Foreign Minister.

The only problem is, there is no Rep. Steve Smith nor is there a 15th congressional district in Georgia. Someone apparently created the fake/parody “Tea Party Patriot” account to mess with people like Amanpour, Sen. John McCain (R-Ariz.) and others. 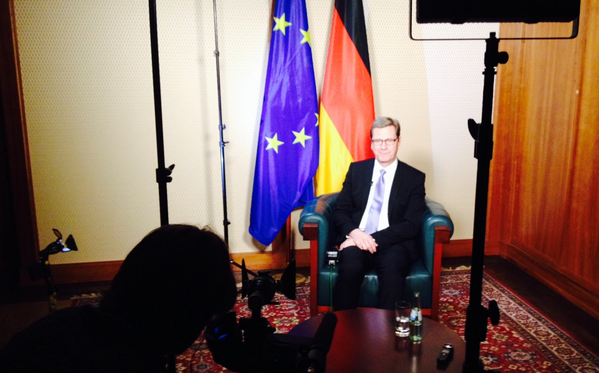 After Amanpour brought attention to the fake congressman’s classless remark, others on Twitter have also attacked Rep. Smith.

Wow, The Associated Press Opens Up A Can: Calls Out The Obama Administration For Acting Like Fascists – Doug Ross Journal

It’s not often I quote bits of an AP article without highlighting the fabrications, omissions and spin, but in this case, I’ll make an exception:

The U.S. government’s aggressive prosecution of leaks and efforts to control information are having a chilling effect on journalists and government whistle-blowers, according to a report released Thursday on U.S. press freedoms under the Obama administration.

The Committee to Protect Journalists conducted its first examination of U.S. press freedoms amid the Obama administration’s unprecedented number of prosecutions of government sources and seizures of journalists’ records. Usually the group focuses on advocating for press freedoms abroad. [Ed: Banana Republic, anyone?]

Leonard Downie Jr., a former executive editor of The Washington Post, wrote the 30-page analysis entitled “The Obama Administration and the Press” … Downie interviewed numerous reporters and editors, including a top editor at The Associated Press, following revelations this year that the government secretly seized records for telephone lines and switchboards used by more than 100 AP journalists. Downie also interviewed journalists whose sources have been prosecuted on felony charges…

…To bypass journalists, the White House developed its own network of websites, social media and <even created an online newscast to dispense favorable information and images…

…Kathleen Carroll, AP's executive editor, said the report highlights the growing threats to independent journalism in a country that has upheld press freedom as a measure of democratic society for two centuries.

It would appear even the AP has had enough of this administration’s behavior, which resembles something in which a tinpot dictator would engage.

I commend Brett Zongker, Julie Pace, and the entire AP for their work.

And, guys, it’s more than past time this administration’s unprecedented series of scandals are revealed to America’s pajama people, who are sleepwalking through the destruction of this country.