.
What happens if you’re that guy who really likes this girl but she keeps dismissing you? Does there come a time when you finally realize this specific girl will never want you? And then comes a girl, maybe not so gorgeous but she’s attracted to you and sees you as a great guy. What do you do? Do you keep hanging around hoping the dream girl finally realizes you do exist – after you’ve spent forever conveying your desire? Or do you find a relationship with someone willing to be with you?

So, imagine how this little scenario plays out in the world of foreign policy.

As reported by the Jerusalem Post, “A delegation of Iraqi Kurds will visit Moscow in April to discuss Russian weapons supplies, the RIA Novosti news agency on Thursday cited the head of an Iraqi Kurd representation office in Russia as saying.

RIA on Wednesday quoted the Russian consulate in Iraq as saying Russia has already supplied weapons to Iraqi Kurds and that the first shipment had arrived on March 14. It said the shipment had included five Zu-23-2 anti-aircraft cannons and 20,000 shells for the cannons.”

Having been in Kurdistan, I can attest that, outside of Israel, you will not find more pro-American, pro-Western people in the Middle East. They wholeheartedly have assisted U.S. forces in Iraq with the defeat of Saddam’s forces as well as Islamic jihadists. They were all in with the new Iraqi government and constitution, yet, with the coming of one Barack Obama, they’ve once again been dismissed.

As a Member of the U.S. Congress I hosted representatives of the Kurdish Regional Government in my office on several occasions and attended many of their sponsored events.

You want an effective ground force to combat ISIS, the spread of Islamic jihadism, and check the hegemonic designs of Iran? There’s no one better than the Kurds. The problem is that while the Kurds were requesting support from the United States, they were rejected. The weapons systems aid was provided to the central Iraq government in Baghdad, and guess what? They were distributed mainly to the Shiite elements, who in turn quickly dropped them as they withdrew, ran away, and then were confiscated by ISIS.

The return on investment for these weapons would have been much higher if they’d been delivered directly to the Kurds. And even worse, after Barack Obama achieved permission from the closet Islamist, his dear friend Turkish President Erdogan, for the use of U.S. military air basing, the Kurds then found themselves being bombed by Turkish forces. These are the same Turkish forces who somehow turned a blind eye as ISIS fighters flowed out of Turkey into northern Iraq and Syria.

So, like the fella who’s been rejected by the girl he wanted, the fella is looking elsewhere to the girl who’s said, “I like you.” Enter Russia and Vladimir Putin…and we all know Putin has some issues with Erdogan and Turkey after they shot down his aircraft.

This week we heard about Russia conducting a partial pullout of forces in Syria. Needless to say it appears Putin is building his coalition in the region. We know Egypt’s President el-Sisi has visited Russia – he’s been rejected by the same girl. Last year, right before the U.N General Assembly, Israeli Prime Minister Benjamin Netanyahu visited Russia – he has been rejected by the same girl. So one has to ask, when will Jordan’s leader King Abdullah court the new”girl?”

The game of foreign policy is being lost by the United States under the presidency of Barack Obama. And these nations who were staunch allies and supporters are realizing they must court others. We’re watching the impact and influence of America slip away. Sure, progressive socialists will say, we’re more liked now – but I will counter that we’re not respected, by friend or foe.

We were once the desired date, but now we’re turning into something completely undesirable. We’re not the trusted ally we once were. And thanks to a nebulous and failed foreign policy folks are doing following the advice of Smokey Robinson and the Miracles: “You better shop around.”
.

.
REELIN’ IN THE YEARS

.
What This Missouri Protestor Is Holding Has The Media Erupting With Outrage – Independent Journal Review 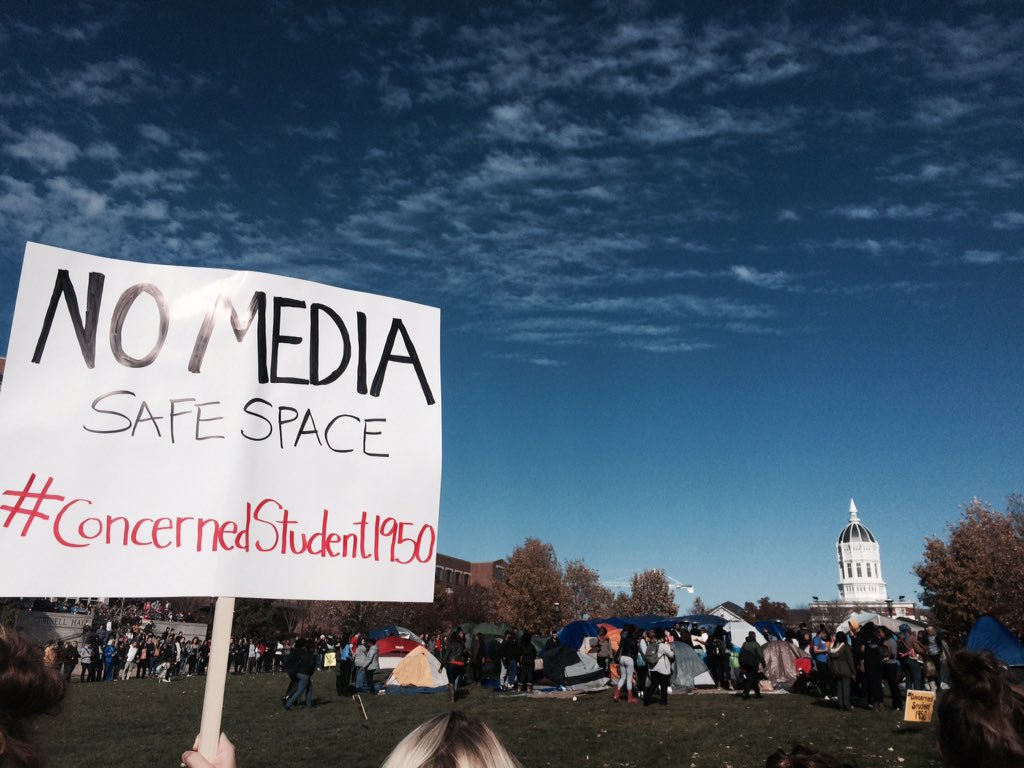 .
Amid Monday’s resignation of University of Missouri president Tim Wolfe, students formed a human blockade to keep out reporters.

Students protesting on the Columbia, Missouri, campus embraced efforts to establish a “safe space,” free of the media attempting to exercise its First Amendment right to cover a public event.

In addition to the “safe space” sign to warn reporters from doing their jobs, students also linked arms to form a human blockade against the press: 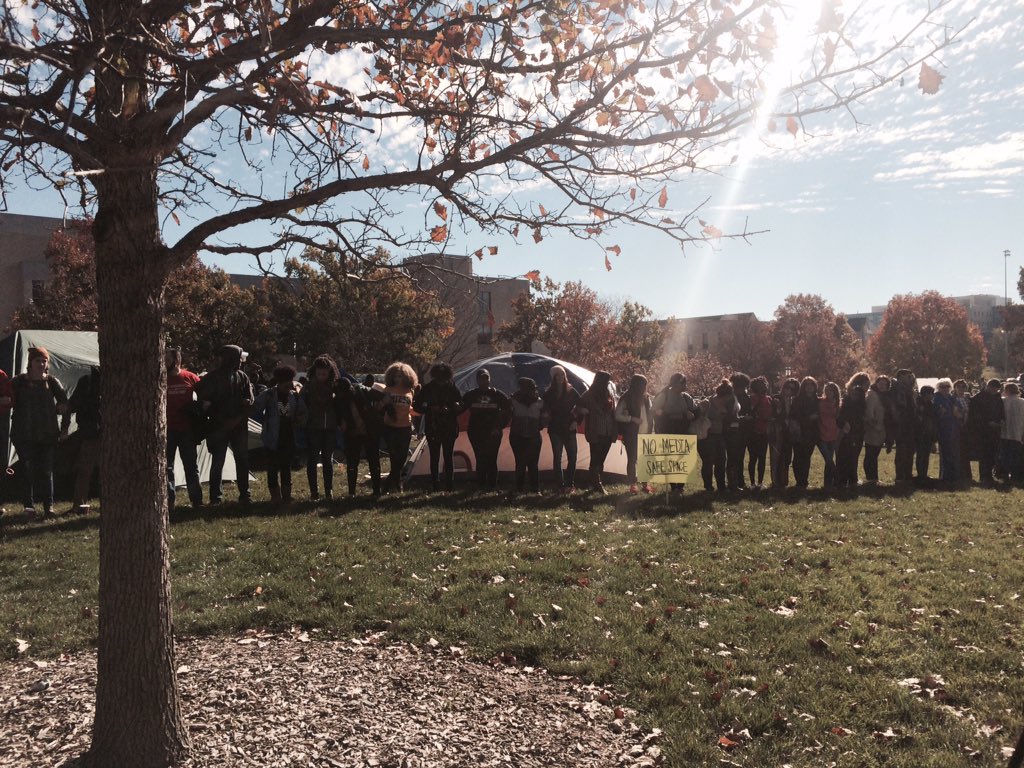 .
The move by students to keep out members of the press came as a shock to many, but left many others confused.

Should make for interesting discussions at the esteemed Missouri j-school. https://twitter.com/hochman/status/663760271781924864…

It’s disappointing to see this response from college students, especially ones at a school with a highly regarded journalism program.

America has always prized the freedom of the press to report the news in the fairest way possible, and when students prevent that from occurring, they threaten the democratic process.

In the wake of a supposed racial controversy, the President of the University of Missouri has resigned.

The entire controversy began when a student, Jonathan Butler, began a hunger strike over alleged racial incidents. This weekend, Missouri football players decided to kind of sorta join the strike a bit. This morning, cowed faculty meekly walked out. Now the President has resigned.

In a letter to school officials posted on his Facebook page, Butler indicated that he began his hunger strike because someone in a pickup truck allegedly shouted a racist insult at a black student government member, because state law prevents Planned Parenthood from performing on-campus abortions and because someone drew a swastika with human feces in a dormitory bathroom.

Some observers have suggested that the bathroom swastika may be a hoax. Why, law professor blogger Ann Althouse has asked, for example, would any dedicated racial supremacist create a swastika out of human feces?

Butler admits in the letter that none of the incidents he cites are Wolfe’s fault. Nevertheless, Butler has concluded, “as a collection of incidents at the university, they are his responsibility to address.”

This summer, prior to Butler’s decision to go on a hunger strike because of racism allegations, the graduate student’s substantially different agenda focused on a change in University of Missouri policy which ended subsidized health insurance for graduate students. To Butler’s chagrin, school officials also stopped offering certain grad student tuition waivers and tore down some graduate student housing.

.
At RedState, Leon Wolf takes the protesting football players to pieces in a blistering list of why they are complete posers. You should read all four points, but the conclusion is perfect.
.

At the end of the day, this isn’t a courageous strike against racism. It’s a lazy strike against practicing for a bad football team. The fact that the media isn’t reporting it this way is evidence of the media’s own laziness.

.
Nevertheless, under the pressure, the President has stepped down.

.
Here’s The List Of Demands From Mizzou’s Protesting Athletes, Students – Saturday Down South

The Legion of Black Collegians and others (including football players) associated with the boycott at Missouri stemming from racial tension on Saturday published a list of demands they want met before things return to somewhat normalcy.

1. We demand that University of Missouri System President, Tim Wolfe, writes a hand-written apology to Concerned Student 1-9-5-0 demonstrators and holds a press conference in the Mizzou Student Center reading the letter. In the letter and at the press conference, Tim Wolfe must acknowledge his white privilege, recognize that systems of oppression exits, and provide a verbal commitment to fulfilling Concerned Student 1-9-5-0 demands. We want Tim Wolfe to admits his gross negligence, allowing his driver to hit one of the demonstrators, consenting to the physical violence of bystanders, and lastly refusing to intervene when Columbia Police Department used excessive force with demonstrators.

2. We demand the immediate removal of Tim Wolfe as UM system president. After his removal, a new amendment to thd UM system policies must be established to have all future UM system president and Chancellor positions be selected by a collective of students, staff, and faculty of diverse backgrounds.

3. We demand that the University of Missouri meets the Legion of Black Collegians’ demands that were presented in the 1969 for the betterment of the black community.

4. We demand that the University of Missouri creates and enforces comprehensive racial awareness and inclusion curriculum throughout all campus departments and units, mandatory for all students, faculty, staff and administration. This curriculum must be vetted, maintained, and overseen by a board comprised of students, staff and faculty of color.

5. We demand that by the academic year 2017-18, the University of Missouri increases the percentage of black faculty and staff members campus-wide by 10 percent.

6. We demand that the University of Missouri composes a strategic 10-year plan on May, 1 2016 that will increase retention rates for marginalized students, sustain diversity curriculum and training, and promote a more safe and inclusive campus.

7. We demand that the University of Missouri increases funding and resources for the University of Missouri Counseling Center for the purpose of hiring additional mental health professionals, particularly those of color, boosting mental health outreach and programming across campus, increasing campus-wide awareness and visibility of the counseling center, and reducing lengthy wait times for prospective clients.

8. We demand that the University of Missouri increases funding, resources and personnel for the social justice centers on campus for the purpose of hiring additional professionals, particularly those of color, boosting outreach and programming across campus and increasing campus-wide awareness and visibility.

.
In this week’s broadcast of his weekly program on TheBlaze radio network, Sheriff David Clarke had a few choice words for the occupier of the White House and his conduct in the orchestration of and response to violence against police officers in America.

Clarke points out that instead of investigating the human rights abuse of black on black crime, the Department of Justice is going after police, making the targeting of them “job one.”

He addresses the murder of officer Randolph Holder in New York, with 96 officers killed last year and another 48,518 assaulted in the line of duty, saying, “That’s the brutality. Many of those suspects were black, in the commission of crimes, threatening a law enforcement officer or failing to abide by their lawful commands, resisting arrest. How about black criminal abuse, black criminal brutality?”

Clarke doesn’t put much value in the apology of Judge Patricia Nunez, the one who released the inmate who would later murder Officer Holder, calling her a criminal coddling, criminal advocating, empathy for the criminal, despicable human being.

He notes, “By the way we still have not heard from ‘president’ Obama, that heartless, soulless bastard, who wastes no time taking to the microphone to stick up for a criminal creep like Mike Brown, like Eric Garner, like Freddie Gray, like Trayvon Martin, in communicating empathy for those goons and yet he has to be prodded, he has to be prodded to say something when a law enforcement officer is killed in the line of duty.”