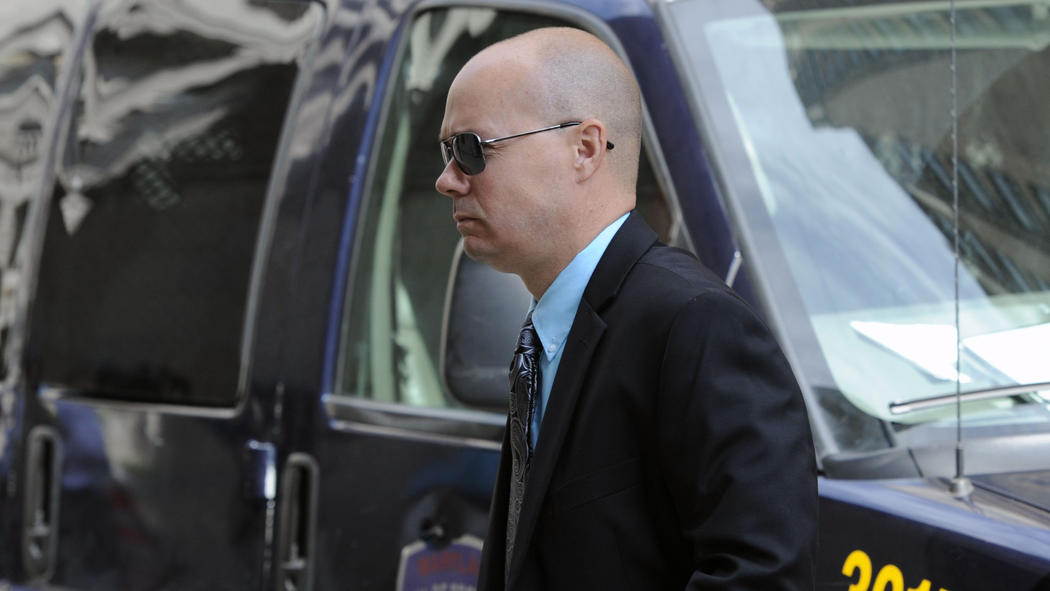 .
A judge in Baltimore Monday acquitted the highest-ranking officer charged in the death of Freddie Gray, marking the fourth trial that prosecutors failed to win.

The judge previously dismissed a second-degree assault charge, and prosecutors dropped a second misconduct charge against the 42-year-old officer, who is white.

Gray died a week after suffering a spinal injury in a police van last year, touching off protests and rioting…

An empty police car parked outside a Florida mosque – intended to deter vandalism during Ramadan – itself was the target of vandals who torched it with a Molotov cocktail over the weekend.

Daytona Police Chief Mike Chitwood says a “ghost” car was stationed outside the Islamic Center at 347 S. Keech St. when someone set it on fire at around 2:30 a.m. Sunday, News 6 reports.

“We were in bed and I heard a ‘boom’ noise. It sounded like a window being broken and I thought it could be someone trying to break into my boyfriend’s car. So I looked out the window and didn’t see anyone near his car then I looked left and saw the police car was on fire,” a neighbor who did not want to be identified tells the News-Journal.

“The police car has been parked there since the Orlando shootings. They move it every now and then but it’s always empty. My boyfriend called 911 and it took so long before they got there that by the time they did the entire car was covered in fire. It took a bit to get the fire out.”

According to Chitwood, when police arrived, a note was left behind reading, “Black Lives Matter A. Sterling P. Castile F*ck the police,” referring to the two black men killed by police in Baton Rouge and St. Paul.

Chitwood says the department has not yet confirmed that arson was indeed the work of a Black Lives Matter protester.

“I really do believe in my heart of hearts that we have a really great rapport with our community overall. They know that if there’s a problem, they can come and talk to us,” Chitwood tells the paper…

.
Just a week ago, French General Directorate for Internal Security Patrick Calvar told members of the French parliamentary commission that thanks to the increasing frequency of sexual assaults by islamic migrants, “Extremism is growing everywhere. We are on the brink of civil war.”

Now, in the wake of the Nice terror attacks that left 84 people dead with over 300 others wounded, Calvar is doubling down warning an increasingly questioned Hollande that an inevitable confrontation between the far right and Muslims looms, posing more of a threat than terrorism.

As SputnikNews reports, French President Francois Hollande faces stern criticism for his feckless response to the growing wave of Islamic migrants and the horrors of terrorism that have followed in their wake leading not only to a resurgence of the far-right nationalism within the country, but also leading members of his own cabinet to question whether he is overseeing the descent of France into a bloody civil war…

A Youtube account operated by Gavin Eugene Long and discovered by The Daily Caller reveals key insight into what might have motivated the 29-year-old black man who killed three Baton Rouge police officers Sunday morning.

Videos on Long’s account show that he was a former Nation of Islam member. He also ranted against “crackers” and made references to Alton Sterling, the black man killed by police in Baton Rouge on July 5.

Other information about Long shows that the Kansas City native, who CBS reported was honorably discharged from the Marines in 2010, went by the name Cosmo Ausar Setepenra.

In one video filmed from Houston and posted to Long’s Youtube account on July 12, the suspected guman discusses being in the Marines and reaching the rank of E-5.

“If I would have been there with Alton – clap,” Long says in a video posted on July 14.

In the video, Long met with several men he seemed to not have known prior to their encounter. He promotes a book he wrote and discusses black liberation ideology…

.
Shakedown Sharpton has struck again, according to an Arizona trucker, who says in a new federal lawsuit that the good reverend promised to help him, then took him for $16,000.

“He’s a crook, he’s a fraud, and that’s all he is,” complains Reggie Anders Sr., who sought out the Rev. Al Sharpton for help resolving a 2009 discrimination dispute with Verizon.

“He didn’t do anything he promised,” Anders said Saturday by phone from Mesa, Arizona. “Absolutely nothing.”

Anders reached out to Sharpton early last year on the advice of his own minister, the Rev. David Wade of Phoenix. Wade knew Franklyn Richards, the chairman of Sharpton’s National Action Network, and set up a meeting…

Tens of thousands of Venezuelans poured into neighboring Colombia to buy food and medicine on Saturday after authorities briefly opened the border that has been closed for almost a year.

A similar measure last week led to dramatic scenes of the elderly and mothers storming Colombian supermarkets and highlighted how daily life has deteriorated for millions in Venezuela, where the economy has been in a freefall since the 2014 crash in oil prices.

Colombia’s foreign ministry said in a statement that at least 35,000 Venezuelans entered Colombia on Saturday, and their entry took place “in an orderly manner and under conditions of security.” The border was opened for roughly eight hours and will be opened again on Sunday, it said. Roughly 35,000 people also crossed during last week’s 12-hour border opening.

Saturday’s opening took businesses in the Colombian border city of Cucuta by surprise since it had been announced that the border would opened on Sunday.

Colombian Defense Minister Luis Carlos Villegas said “we have made a great effort to have sufficient supplies” for the Venezuelans expected to stream across the border on Saturday and Sunday.

Gov. Jose Vielma of the Venezuelan border state of Tachira said that President Nicolas Maduro supported the opening, ordering that people “not be disturbed” when they crossed into Colombia…

According to the Associated Press, the violence occurred just before 1 a.m.:

Kern County Sheriff’s spokesman Ray Pruitt tells KNX-AM radio that homeowners allowed their daughter to host the party. She promoted it on social media and about 150 people arrived – many uninvited.

An #Afromation demonstration in Baltimore that blocked northbound traffic on the Interstate 83 was soon broken up when police moved in and arrested demonstrators. The Baltimore Sun reported a total of 55 adults arrested, along with 10 minors.

Original reports stated only 20 arrests, but this climbed quickly to 65 in total. Demonstrators were either moved into nearby Penn Police Station or onto vans.

According to The Baltimore Sun, processing of the arrested #Afromation demonstrators was still continuing at midnight, hours after the arrests. This is confirmed by a tweet uploaded by one of those arrested.

Pickle kept people informed of what was happening, saying that many had not yet been taken to Central Booking because of insufficient resources to process them all. As of 1:30 a.m., 6 hours after her arrest, she, and likely many other #Afromation demonstrators, had still not been made aware of the charges.

One of the #Afromation demonstration organizers, David Blaim, was interviewed by The Baltimore Sun. He said that when police came and told them to move off the road onto the shoulders, most people complied. Police had said an ambulance was coming. Instead of an ambulance, however, two police vans appeared and the arrests began…

.
The world is on fire, the Middle East is a mess, race relations in the United States are at an all time low and the economy is still lagging.

What is Hillary Clinton worried about? Citizens United.

She has vowed to make the limiting of free speech one of her top priorities if elected.

Hillary Clinton committed Saturday to introducing a constitutional amendment to overturn the Citizens United decision within her first 30 days in office, if she’s elected president…

Internet hacker “Guccifer 2.0” released the Democrat Party’s plan to disrupt the RNC in Cleveland and harass delegates at the convention.

Democrats plan to spend at least $800,000 on operations to torment Republicans at their convention.

Hundreds of paid liberal activists will also converge on Cleveland to disrupt and cause mayhem.

The Democratic Party’s plan to crash this month’s Republican National Convention is heavy on gimmicks and stunts meant to highlight a possible “Trumpocalypse,” as well as to ridicule the presumptive GOP candidate’s purported spray tan, tiny fingers, and dog whistle proclivities.

The Democratic National Committee’s “Counter Convention Plan Sketch” covers 22 pages and outlines the party’s activities in Cleveland, where the Republican convention begins July 18. Democratic operatives will launch their operation a week earlier, on July 11, to coincide with the opening of the RNC’s summer meeting.

A copy of the plan was obtained by the hacker “Guccifer 2.0,” who breached party servers and made off with DNC financial records, e-mails, research reports, and other documents. In e-mails to TSG, “Guccifer 2.0” has claimed to be a Romanian “hacktivist,” though security researchers who have examined the DNC breach have said that the infiltration appears to be the work of a Russian espionage unit.

The DNC plan notes that the party’s efforts in Cleveland will cost in excess of $800,000. In addition to 16 staffers on the ground, the party will have numerous surrogates available for media interviews and an RV to “serve as a mobile billboard” and green room. The plan was honed when the GOP field narrowed to Donald Trump, Ted Cruz, and John Kasich. Subsequent updates focused primarily on “gimmicks” to ridicule Trump…

.
Following a new primary election poll showing that House Speaker Paul Ryan has plummeted to well below 50 percent in his home district, Ryan is out with new mailers assuring Wisconsin voters of his desire to secure the border, and urging them to support him in his contentious August 9th primary election.

The new mailers touting Ryan’s support for border security is interesting given that just last year, Ryan championed a spending bill that fully funded President Obama’s open borders agenda – including funding sanctuary cities, executive amnesty, and the release of criminal aliens. The mailers also come amid new reports indicating that, one month after his election, Ryan plans to bring up “criminal sentencing” measures that could release thousands of criminal illegal aliens from prison onto the streets.

“Keeping America safe is a big job. And it’s the most important one there is,” the Ryan mailer reads. “Protect our Homeland – that means securing the border, confronting Islamic Terrorism, and tackling new threats by stopping them from reaching our shores… Paul Ryan for U.S. Congress… Vote Tuesday, August 9th”…