CLAYTON COUNTY, Ga. – Clayton County police are investigating threats against officers made by a woman in videos posted on the Internet.

Police say the woman who made the Internet threats lives a mile-and-a-half from a Clayton County police station.

The videos are filled with profanity and hate for white people.

The woman in the video, Latausha Nedd, who goes by the name Eye Empress Sekhmet, calls for a war on not only white people, but she advocates shooting police officers.

“I say let’s have a take a gun day, and start walking up on these untrained and stealing their weapons,” Nedd said.

.
Here’s some of the uncensored video (warning for language):
.

.
Here’s another interesting fact. In the first video above, there are two men in one of her videos, one identified as ‘Black Supreme Power’, the other as ‘Palmetto Star’.

Palmetto Star was involved in organizing the Black Lives Matter FYF event at Stone Mountain on 9/11. If you’ll recall they said they were going to have 2500 people out and ended up with 8.

Here’s a picture of the eight: 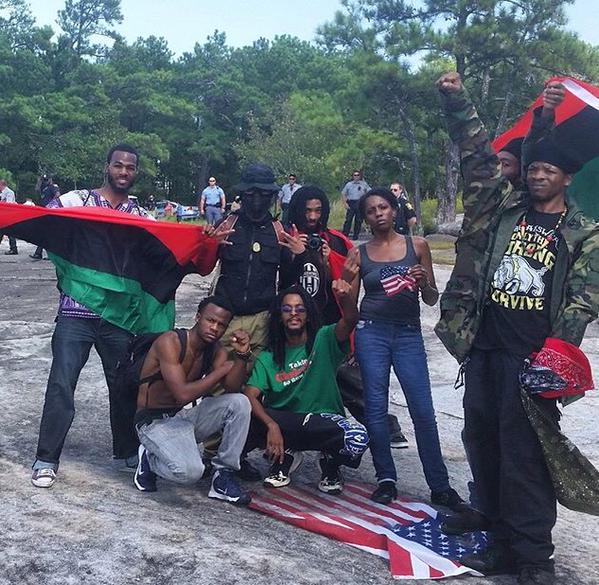 .
Latausha showing her affection for the flag on Memorial Day:

.
She used to work for the Georgia Citizen’s Coalition for the Homeless, Amnesty International and other social justice organizations. She was a fellow of the ‘Women’s Policy Institue’ to train grassroots leaders in California to help pass legislation.

The charges for the ‘Empress’ include making terroristic threats, criminal solicitation (urging people on youtube to kill white people and take over police stations), battery and ‘cruelty to children’. We do not yet know the story behind the last two charges yet.

After all sorts of proclamations about not caring what the police or anyone thought, her buddy, Palmetto Star, is now claiming the youtube threats were part of a ‘movie’. Given several videos and appearances on his blog talk radio show, it’s clear that was not the case. He also encouraged people to phone harass the police to ‘check on her’.

The judge denied her bond, so the Empress is going to sit for a bit.