.
While Bree Sison of WBZ-TV estimated the crowd numbering in the hundreds, Boston.com described the area in front of the State House as “teeming with protesters,” noting that rally organizer Jeff Kuhner, host of WRKO’s The Kuhner Report, put the number closer to 10,000.

Sison did note that the rally was the largest she’s ever seen on Beacon Hill: 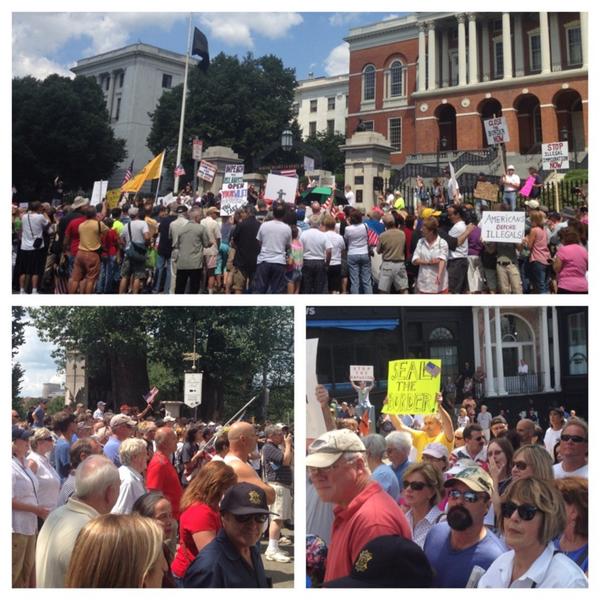 This week, a state official said it remained “unclear” how many unaccompanied minors crossing the nation’s southern border illegally would be coming to Massachusetts and how many could stay in the state longer. The state has offered to house up to 1,000 children at one of two secure facilities for up to four months.

“These are not children,” Kuhner added, Boston.com reported. “When you say child, the implication is 4, 5, 6 [years old]. They’re teenagers – many of them are gangbangers… If you’re 15, you’re not a child. A child is 12 and under.”

“I’ve never seen any kind of a backlash like this before on any issue ever,” Kuhner said of Patrick’s decision, Boston.com noted. “People in this state are livid. They feel betrayed by the political elite.”

Here’s a portion of what Kuhner told the crowd:

.
Kuhner also noted what he saw as a diverse group:

“When I see this army in front of me, and I see them black and white, Hispanic, young, old, men, women, Americans, children, adults, rich, poor, veterans – our great veterans – legal immigrants like Jeff Kuhner, that when I raised the alarm, when I called out for all of you to come, and I see so many of you here standing by me shoulder to shoulder, I can’t tell you… how honored, humbled, and touched I am.”

.
Kuhner came to the United States in the 1990s on a work visa as he worked towards a Ph.D. Still a Canadian citizen, he was issued a green card in 2006. Kuhner said he is currently in the process of becoming a naturalized citizen, Boston.com noted.

Over 5000 people showed up today at the State House for the @TheKuhnerReport rally against illegal immigration!
1:29 PM – 26 Jul 2014